A cyberattack refers to a malicious action designed to target a computer or computerised information system to change, destroy, or steal data, as well as exploit or harm a network.

Cyberattacks have become increasingly more common over the past number of years, especially with the rise of remote working and poor infrastructure to deal with this change.

Research indicates that just under half of Irish companies suffered at least one cyberattack in the last 12 months. The median cost of an attack in Ireland continues to rise, being over €15,300, and for some of the worst hit businesses costs topped €4.5m.

An effective cyberattack can have a detrimental effect on how your business operates. Discussed below are the most common types of cyberattacks on businesses.

Malware is a form of code, file or application delivered over a network to infect a system, allowing the attacker to conduct any activity they want on your machine.

Ransomware is a type of malware that encrypts or threatens to publish your data or files until a ransom is paid.

Your organisation can protect itself against malware by installing anti-virus software, regularly updating operating system and application software, and by only installing software from trusted sources.

Named after the Ancient Greek story of the deceptive Trojan Horse that led to the fall of the city of Troy, this type of virus poses as a legitimate program.

This form of malware is usually hidden within a free-to-download file, program or application. Once the program is downloaded, the malicious code will execute the task the attacker designed it for. It could potentially give backdoor access to internal systems, spy on users’ online activity, or steal sensitive data.

The downloaded Trojan Horse can often remain on a device for months without the user even realising. Reporting unusual computer performance and regular antivirus scans are the best way to spot and remove Trojan Horses from your PC.

Phishing is a type of social engineering attack. This is where an attacker sends a fraudulent message which has been designed to trick a person into revealing sensitive information to the attacker or downloading malware.

Email phishing is one of the most common methods of phishing. Attackers often go to great lengths in designing phishing messages to mimic real emails from a spoofed organisation.

Training employees to be able to spot the characteristics of a phishing email is one of the most effective ways to minimise the chances of a successful phishing attack.

A DDoS attack is a Distributed Denial of Service attack. These occur when a perpetrator seeks to make a machine or network resource unavailable to its intended users by temporarily or indefinitely disrupting services of a host connected to a network.

It essentially means purposely overloading a network with a large volume of traffic, with the intention of bringing it to a halt.

DDoS attacks can be mitigated by a network being able to establish whether traffic is normal or attack traffic. A solution can be deployed to distinguish between this traffic to provide you with always on DDoS protection.

Passwords aren’t an infallible security measure. They can be cracked or stolen easily, especially if they’re weak and reused regularly.

A password management solution is a great way to keep your organisations passwords secure. Similarly, the use of two-factor authentication (2FA) helps add an extra layer of protection for any of your accounts.

Being prepared for a potential cyberattack and having a plan in place for when something goes wrong is key for minimising disruption to your services.

Are you preparing to alter your data protection strategy? If so, contact us today on +353 1 8041298, or click on the link below to be brought to our contact form.

Get in contact today to see how Dataconversion can help you improve your customer experience & accelerate business performance. 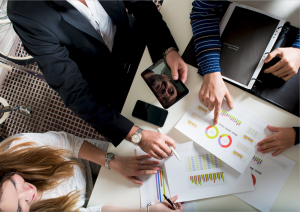